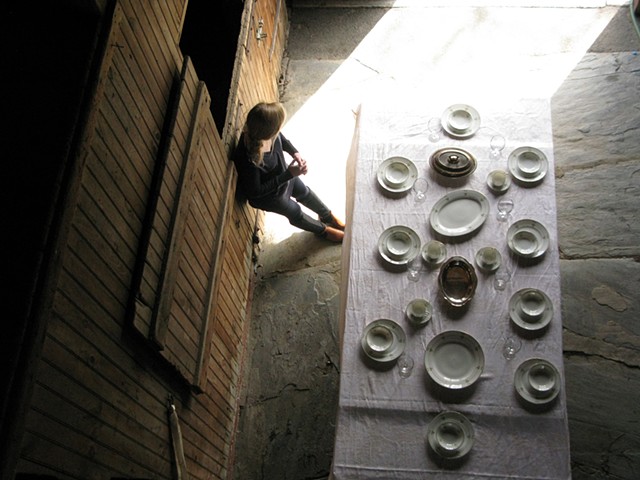 Art Karlsruhe, Galerie Anja Knoess Karlsruhe, Germany February 2019 On where I am from and how I arrived at my latest work:

A net of north light is cast through a hay hatch in the barn loft above carriage horse stalls where I learned to see and began to paint. The light catches dust and swallows, coiled ropes and painter's eyes. The hatch's timber frame crops the surrounding landscape to a postcard view of farm fields stewarded by Amish neighbors. From some vantage points it is a bucolic scene. I see it riddled with questions and pocked with rabbit holes.

Throughout childhood in rural Pennsylvania, I painted what I observed and what I imagined from my perch above a carousel of animals turning through the years, rotating stalls, making predictable but ceaselessly wondrous circles from new life to death. In the barn loft was a secret annex. It was hidden behind a panel of tongue and groove wood flush along the wall hung on rust brittled hinges. It had been a fort to a kid who left it cluttered with relics of his time and things he loved. By the time I leaned on the wall and fell into the room cast with magic, the boy was surely grown and long gone. I dwelt on the mystery of the annex's former tenant and the question of what, of my time, I would leave in other secret rooms and forgotten places. It was there in his fort-turned my studio-that I first cracked the spine of a book on art history and I fell through another threshold. Layers of dirt, gems, oil, sap, flax mounted on geometric scaffolding made a canon of western paintings with a common goal to deceive a viewer. My imagination was captured by the alchemy of inventing scenes that unfold from tactile but imaginary windows. The idea was planted behind my eyes to see more, look harder, to build other deceptive doors that are portals to the past. A frontier of curiosity unrolled and I left home to study art.

My mentor during and after high school was Myron Barnstone. His studio was in an old factory among industrial ruins in Pennsylvania. He had arrived there by way of coastal Maine, Oxford England, a palatial studio in an orange grove in Spain, a defining exhibit and a brush with Picasso in Paris. In his factory studio, he instilled virtues of classical design, technical drafting, harmonic color theory, and hard work. The Pennsylvania Academy of the Fine Arts in Philadelphia fostered me further and I took courses at the University of Pennsylvania until a travel fellowship led me to Europe. My education continued on the coast of Norway with painter Odd Nerdrum. There I painted boulders, bricks, skulls , and sky that never dimmed. In Italy, a course opened doors to such places as the Vatican conservation labs and Etruscan tombs in the countryside. I studied the chemical composition-or decomposition of specimens from art history. In Rome, upon seeing Carravaggio's "Conversion on the Way to Damascus," it occurred to me that wherever I went, my compass pointed homeward. Caravaggio's painting of a horse, milk and weak tea colored by candlelight reminded me of my childhood pony, above her stall I practiced painting. When I look at art, north is where I learned to see.

Upon returning from abroad I settled in a coal mining region of West Virginia. I sought to make a body of work about the local history, a changing landscape and a knotted family tree writhing out of the side of a mountain. I set up shop in an all but abandoned theater where there was a thick audience of ghosts. I collected stories on the stages of front porches where parallel ruts had been worn by rocking chairs. Some facts I gleaned from the granite toothed mouths of cemeteries and farmhouse walls that talked since mortar succumbed to rain and wind in the absence of a caretaker. I painted about the people, their genes I carry, whose work in the mouths of the coal mines created possibility for me. My paintings are thank you letters.

The work yielded an opportunity to attend the Skowhegan School of Painting and Sculpture in Maine. There, I revisited my first subjects. In childhood I had painted intuitively about the Amish who gave me my first lessons on perspective, still illuminated in my memory by kerosene lanterns and jewel colored garments. It became important to paint cryptically, using keys from art history to tell stories of people who appear, from the view of a passer-by, to belong to another time, but whose lives and hardships are a testament to modern America. The artists I was referencing-European and American- from Rembrandt to Vermeer, Courbet and Millet to MacEwen, Koehler, and Homer to name a few, led me through movements of history and facets of culture, and I wondered where my own family's past correlated to their accounts.

I crisscrossed the country, then moved to Europe, conducted by curiosity, capturing sense of place in pockets that had fed my artistic predecessors and where my family's lore was born. I retraced the steps of people whose plights were to find work, resources, refuge or rest and I saw the flickering of restless spirits.

Artifacts found in the wakes of such people are reminders that the past is not dead; graphite scrawl, silver gelatin shadows, root stock of bred roses, palpable legacies remembered by fireside under moth eaten black skies. These traces and the conventions of art unique to each of their lifetimes, a parallel story, have helped me invent portraits and relay the stories of a succession people, whose fates led to my chances. With a fellowship for a residency at the Vermont Studio Center in Johnson Vermont in 2013, I began the paintings included in the "Latest and Recent Work" folder. It was a time and place of such plenty that the grass under apple trees smelled of cider in September. It was fertile ground to paint about the yield, the frost, the far away angle of repose of the fruit of family trees.

I have kept a foot abroad since 2010, but often return to my first studio, the barn loft in rural Pennsylvania. It is where I paint with most clarity on the subject of where I am from, what I have found elsewhere, what I wish to see and hope to leave in secret rooms. "The past is never dead, it is not even past." - William Faulkner A review of an exhibit at Dowling Walsh Gallery in the Portland Herald: http://www.pressherald.com/2014/09/21/sarah-mcrae-mortons-painterly-dreamscapes/